On April 30 Frisky returned to Bisterne from Ibsley, after the field was repaired. After a mission to bomb the enemy airfield at Evreux was cancelled on the first of May, and Frisky found himself in the chair watching a special film on dive-bombing in the Group’s briefing room. The group’s mascot, a fawn-colored cocker spaniel named “Flaps” attended too, lifting his head when the film showed scenes of P-47s with roaring motors.

Motors were roaring for real at Bisterne on 1 May 1944, as four pilots in the 406FS performed operational testing of the new surface with combat loaded aircraft. A four-ship flight led by Maj. Taylor, with Captains Goolsbee, Salmi and Doorly, made their first takeoff with a belly tank and two 250-lb demolition bombs. They also tested the field with a load of a belly tank and two 500-lb demolition bombs, and found for each load, they had to use the complete length of the runway for takeoffs. 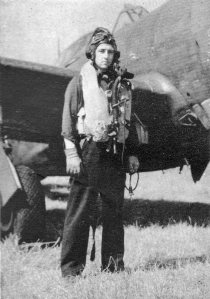 Maj. Edwin D. Taylor. Commanding Officer of the 406th Fighter Squadron, led tests of the new runway surface at Bisterne Airfield in early may, 1944. He commanded the squadron from July, 1943 to September, 1944. (The Story of the 371st Fighter Group in the E.T,O., via Mr. Francis E. Madore)

On May 2, with the runway apparently able to bear a combat-loaded P-47’s weight, the group flew a combat mission, to provide close support for A-20 Havoc light bombers over to France to bomb Evreux-Fauville. But the mission was a SNAFU from start to finish, as confusion on the ground delayed takeoffs until 1308 and the rendezvous with the bombers was 45 minutes late. A pilot missed his takeoff position and others behind him followed into disorder. Radio channels were overloaded with communications as disoriented flyers tried to get oriented. It was a royal mess. As a result, the bombers waited over the channel for the fighters. But when the fighters finally made it, the bombers, much lower on fuel, returned to base and did not accomplish the mission. Frisky circled once and then headed for home.

1st Lt. William R. Lamb handled an inflight emergency on return from a combat mission on 2 May 1944. When one of his main landing gear would not come down, he made a smooth belly landing at Bisterne, saving the aircraft from loss. (The Story of the 371st Fighter Group in the E.T.O., via Mr. Francis E. Madore)

His squadron and the group waited while he was talked through the problem and then, when the gear would not cooperate, talked him down to a belly landing.

Also on that day, high rank rolled in when IX TAC Commander Major General Elwood R. “Pete” Quesada inspected the field, and witnessed the 371FG “picnic.” But he was keen to see how the new surface was performing and “…was quite displeased at the condition of the metal matting which was proving unsatisfactory.” The whole advanced landing ground concept seemed to be a headache, not only for Frisky, but for the chain of command as well. Fortunately, no heads rolled for the flubbed up mission, or as the 406FS monthly history reported: “No heads are to be seen on spikes at the entrance to Headquarters.”

Maj. Gen. Elwood R. “Pete” Quesada smiles from the cockpit of a P-38 Lightning fighter. He commanded the IX TAC of the 9th Air Force when the 371st Fighter Group served as an Advanced Landing Ground “guinea pig” in the spring of 1944. (U.S. Air Force photo)

The 404FS history for May reported that the unit suffered “…an epidemic of flat tires…” on the new surface. Further, it said engineers had put a layer of straw beneath the new metal matting in some effort to cushion it, but the effect was described as thus: “…a billowing wave of steel rose up before each ship on takeoff and landing, slowing it up and creating a hazard.”

May 3, Frisky flew another mission, giving the new surface at Bisterne another test. And a plane flew into Bisterne carrying the Commanding General of 9th Air Force, Lieutenant General Lewis H. Brereton on an inspection of the field. Clearly there was significant concern over the utility of the materials in the ALG concept.

Lt. Gen. Lewis H. Brereton (as a Maj. Gen. in this photo) was the Commanding General of 9th Air Force during the period when the 371st Fighter Group tested out the Advanced Landing Ground concept at Bisterne Airfield. (Wikipedia)

Col. Dyke F. Myer, who recently commanded the P-47-equipped 366th Fighter Group and then became IX TAC operations officer, led the mission and was clear in his briefing about the minute details of ground and air operations which he expected to see. 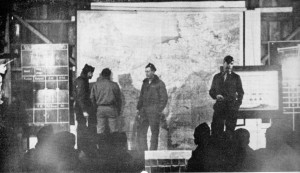 The mission was a fighter sweep, entering over France near Cayeuz and flying south to Montes, circling near Rouen and departing France at St. Valary en Coux. The enemy responded with some flak at various points but no aerial opposition.

And, like the previous mission, this one was punctuated with a mechanical malfunction. Lt. Harry Strahlendorf of the 404FS experienced an engine failure while landing, kept control of his ship and “…brought the ship in nicely but roughed it up a bit going through a fence.” 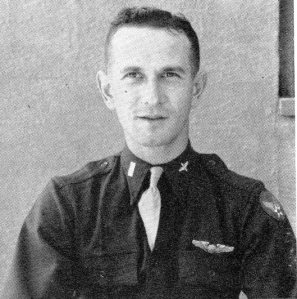 1st Lt. Harry W. Strahlendorf, 404th Fighter Squadron, successfully landed his Thunderbolt at Bisterne on 3 May 1944 after the aircraft experienced an engine problem on return from a combat mission (The Story of the 371st Fighter Group in the E.T.O., via Mr. Francis E. Madore)

As a result of the issues with the new steel matting, on May 4, late in the day Frisky’s planes were ordered back to Ibsley while the aviation engineers took another try and improving the concept. At Ibsley, the 371FG P-47s occupied the southern and eastern parts of the airdrome with the 48th Fighter Group on the other side; the base was a veritable hornet’s nest, 150 Thunderbolts strong.

So the 371st Fighter Group ran split ops again, with personnel and support still at Bisterne, with flying operations at Ibsley. Ground crews had to return to Bisterne for meals in between missions. Bombs and drop tanks had to be trucked over from Bisterne to Ibsley. Pre-mission briefings were held in a tent on the line. Although it was a bit of a painful exercise, it did give frisky a hint of what was to come in expeditionary operations on the continent of Europe, something that would pay off in the near future.

The Brass used Frisky as a guinea pig to test out the Advanced Landing Ground concept in the period leading up to D-Day. (The story of the 371st Fighter Group in the E.T.O., via Mr. Francis E. Madore)

“Mission Accomplished: The Story of the XXIX TAC,” Stars & Stripes, 1945, at: http://www.lonesentry.com/gi_stories_booklets/29thtac/

This entry was posted in Uncategorized. Bookmark the permalink.