Was spent at Bisterne Airfield, otherwise known by several other names: Bisterne Advanced Landing Ground (ALG), USAAF Station 415, and also as Ringwood.  It was Frisky’s first home away from home.  The field was located adjacent to the hamlet of Bisterne, about two miles south of Ringwood, and some 85 miles southwest of London.

Bisterne was a prototype for the type of temporary, expeditionary flying field known as an Advanced Landing Ground.  The design template used for construction would be used time and time again after D-Day for many fighter groups operating on the European Continent, first in France and then eastward on the way to Germany. 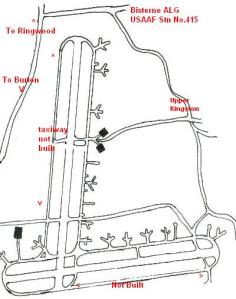 Bisterne Advanced Landing Ground Runway Layout. Large portions of the taxiways shown on the map were planned but not actually built, as you can see in comparison to the image below (Courtesy hampshireairfields.co.uk).

In the days after arrival in the first week of March, 1944, the group more or less adjusted to camp life, living in tents (at least with wood floors!) on a “suitable site” nearby in the hills above Bisterne.  In those early days, personnel were busy clearing the brush from wooden floors, and received candles for night illumination until generators were provided.  Blankets were issued and small, coal-fired cylindrical stoves heated the tents.  Latrines were set up.  Water was piped in.  Gravel and brick walkways were established.  Across from the tent site were the mess tents, and an officer’s mess was set up with a large hospital tent.  A PX was opened too.  “Notice of Safe Arrival” cablegrams were sent off too.

Within a week’s time, the men were able to sally forth from the camp on pass and go on liberty runs to places like Bournemouth and Ringwood.

The group began to receive the help of attached units, such as the 1228th Military Police Det, which guarded the tent site and the airfield.  Also arriving was “Det” J, 21 Weather Squadron, and “Det” J, 40th Mobile Comm Squadron, to help bring Frisky into a fully operational state at a deployed austere location overseas.

Even after all the stateside training, more theater-specific orientation training and observation was required.  On St. Patrick’s Day verbal orders arrived to send 20 pilots, squadron commanders and flight commanders mostly, to Beaulein (sp?) for operational training with fighter groups, to begin on March 20, 1944.

And then there was the theater-specific unit operations training.  The next day, 18 March, Major Bacon and Captain McBride left the group for about a three-week period, first to 9th Air Support Command, and from there to temporary duty in Italy for indoctrination and training in fighter bomber operations. 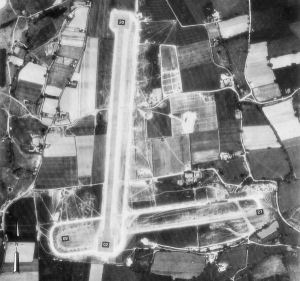 This aerial photo of Bisterne Airfield was taken on 22 May 1944. More than 50 P-47 Thunderbolts of the 371st Fighter Group are dispersed along the perimeter loop. (Wikipedia)

The brand new Bisterne Airfield was not quite ready to handle flying operations, and on 21 March verbal orders from 100th Fighter Wing headquarters arrived, directing all pilots to be sent for operational training to other fighter units until Bisterne was ready for operations.  Having come so far since July, 1943, Frisky was still scrambling to get ready for combat with the enemy, as D-Day approached.

Bisterne’s lifespan was rather brief as airfields go, lasting only into the summer of 1944 as the war moved on.  But it was an important part of the 371st Fighter Group’s history. 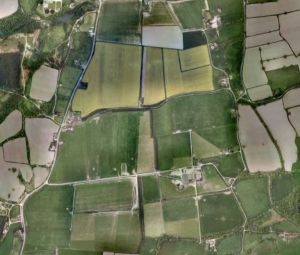 Shortly after D-Day the 371FG moved to France and Bisterne was closed. By early 1945 the steel matting runways were removed and the land returned to agriculture. More than sixty years later it’s still possible to see where the airfield was by comparing this image to those above. (Courtesy hampshireairfields.co.uk).

This entry was posted in Uncategorized. Bookmark the permalink.